Naomi Haverland
This is my blog AND my website now. Click on the " my paintings" tab to view my paintings. Scroll down to read my blog. 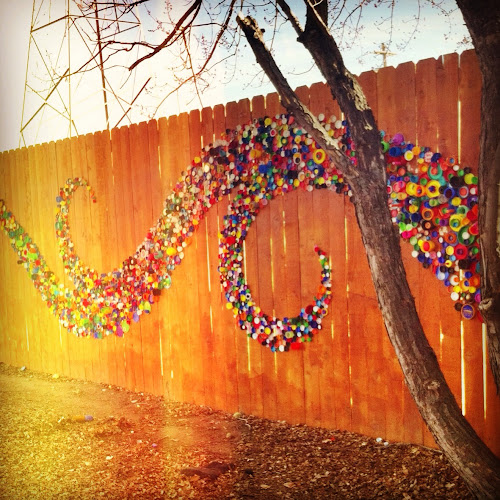 This is a project that I started with the kids when we first moved into the house, and I predict it will be an "unfinished project" for the entire time we live here. Unfinished projects are usually bad, but sometimes they can be good, if the project is one that is meant to grow and evolve, and if time itself is an element in the piece of art.
Jodi originally had me start collecting caps for her. I don't know what she was going to do with them, but when she decided to move to Scotland, she abandoned her cap collection and I inherited all she and I had collected. Thankfully, when she moved back from Scotland, she didn't ask for all her caps back. In fact, she is one of my most loyal collectors/donors.
I have a big tub in the pantry of our kitchen and every time we end up with a plastic cap, we throw it into the tub. (By the way, threaded plastic caps can't be recycled, like their plastic containers can be). Every time the tub gets full, we go out back and glue them to the fence using liquid nails glue. I lightly sketch a wave shape on the wood, and then the kids and I glue the caps around the chalk line. At first, just our family was the major contributor of the caps- every now and then people would give me some, but most of them were from whatever products we used. But ever since I posted photos of what we were doing, I've been getting more and more cap donations from other people. At this point, I probably have way more donated caps than my own caps.
I know a cap that you would normally throw away seems like a small thing and not much of a sacrifice, but it really does make me feel so good when someone gives me a bag full of caps. Because, it's one thing to buy or make a gift for someone when they are having a birthday, or at Christmas time. But it's a totally different thing to slowly and gradually accumulate something for someone during the course of your mundane life. One cap isn't much, but a bag FULL of caps really adds up! A bag full of caps is a whole lot of thoughts of love for me during very intimate and personal daily moments. It's means that there was a moment when someone was making a PB&J sandwich for their kid, and they were scraping the last bit of peanut butter out of the jar while their kid sat there waiting, and then they thought of ME. Or... It means, they were naked in the shower, squeezing the last bit of shampoo out of the bottle, and they thought of ME. Or it means as they took their last Xanax pill and remembered they had to refill their prescription, they thought of ME. It means the thought of me invades people's lives in a very small, but very frequent amount that adds up to a whole whole lot and I'm just amazed that people actually do it for me.
I mean.... not everyone does it. And I understand. I don't know how much someone would have to mean to me before I would alter my lifestyle for them.... and maybe the people that do it for me, aren't perceptive enough to realize that all those small sacrifices of stockpiling caps actually accumulate to equal quite a bit of a sacrifice, and I'm thankful for their ignorance. 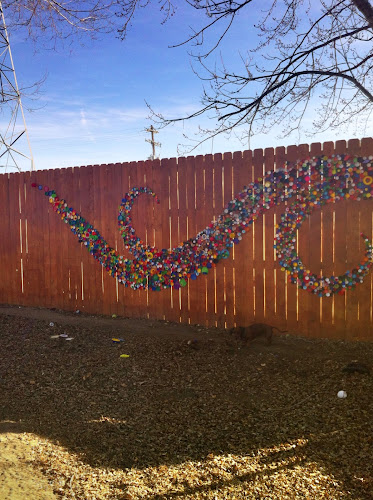 Once a month, I get together with three other moms from the kids' school in Highlands Ranch for breakfast, and each of them always has a baggy of caps to give me, and it feels like Christmas for me. Sarah, one of the ladies, even brought caps back from her vacation in Hawaii for me, irritating her husband when it took up space in their luggage. I'm amazed at people's willingness to inconvenience themselves like that. And every Sunday at church, there is always at least one person who hands me a grocery sack full of caps. Warms my heart so much!
And it's not just for the finished product of having a colorful fence- it's for the experience for me and the kids- it's amazing how therapeutic the process is. We play music and the repetitive act of grabbing the cap and placing it on the fence becomes like a dance. It's colorful, and we're in the sunshine, and as an array of spots and circles grow down the fence, I try to honor each plastic cap as it goes up, knowing that at some point, there was someone behind it honoring me in a small way too. The pictures below don't show it, but we've got a pretty huge backyard and there is a whole lot more fence that isn't showing. Our fence goes on like, forever. So that means the wave of caps can keep growing and growing the longer we live here. It's such a fun ritual that makes us feel so blessed. So many people love us and we're so lucky for that! 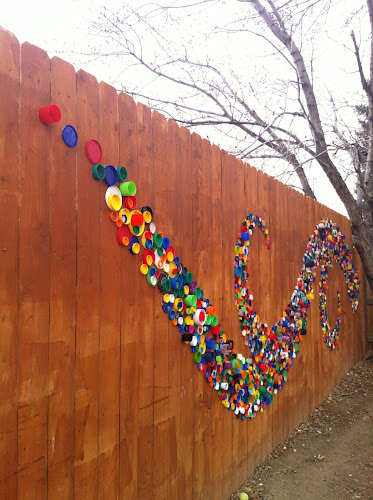 Posted by Naomi Haverland at 10:53 AM

Totally cool! I mean, wow! Love it. So much.

...or scraping sunbutter jars...love this post! Thanks for sharing & allowing us all to be a part! You (& your sweet family) are loved. No doubt.

Love, love love your story. Have been trying to figure out how to use the caps I've been collecting. What a great way to have community with all sorts of folks:) How did you adhere them to your fence? Please share so others can create:) thanks so much.
LLB

You say you used liquid nails but don't they fall off when they've been in the weather a while? I too have been gathering but have yet to decide on what my wall will look like... probably a tree with caps for 'blossoms'.

This is an old blog post- you are correct. I have switched to using tiny screws. I use a battery powered screw driver to drill them in. I bought the screws in bulk. At this point, the fence is almost entirely covered.

We have a shed wall facing our yard (actually our neighbors shed) and now that I have permission, I am looking for ideas to "create" something beautiful. Your caps are an inspiration!

I have a she with vinyl siding, not sure I want to put that many screw in it but I love this idea. Any suggestions?


Awesome article! Thank you! What will you post about next?
clipping path service

I LOVE this post! Love the idea! Will check out more of your site.